MAKING OF AN INCLUSIVE MOUNTAIN

Tiruvannamalai is an ancient nature worship site, situated in the Bangalore–Pondy Highway, Tamil Nadu. The fertile land around the hill was highly potent for farming and soon became an important human settlement in South India. During the Sangam/Classical period (3rd century BCE to 3rd century CE), Buddhism and Jainism were the most prominent philosophies in South India and during that time, Tiruvannamalai became one of the important centers for Jain culture and learning. Later, many a legends and mythical stories of Tamil Saiva lore grew around the Annamalai Hill and it came to be revered as “Agni”.

Colonial documentation, beginning from the 1880s, had reduced the town of Tiruvannamalai to its most visible two elements – the Annamalai hill and the Annamalaiyar temple. Very few images and even lesser information about the men behind the images are available from this period, but it seems certain that very little apart from the hill and the temple interested colonial photographers. The “second phase” of photographic history of Tiruvannamalai came about with the emergence of Ramana Maharshi, whose presence in the photographic images of Tiruvannamalai is simply overbearing. To this day, Tiruvannamalai’s identity is tied to Ramana through the photographs of P R S Mani, G G Welling, Dr. T N Krishnaswamy, Eliot Elisofon, and Henri Cartier-Bresson. These histories of documentation have consciously or unconsciously warped the nature of photographic representation – even if we are talking about a tiny temple-town.

Contemporary photographic image-making has to be redirected to the regions avoided by these partial histories. EtP’s pilot photo-art project, Project 365 Tiruvannamalai, was an attempt to enable the visual recording of this town by tapping into the distinct lives that inhabited it, which had so far been left out of photographs of the region. The project has been undertaken at a paradigm shift moment, when the impact of globalization and technological advancements is fast changing the contours of contemporary life, lifestyle and people. Even though photography has pervaded every corridor of human life, very few images are available in the public domain and even less are preserved for posterity. Besides, in the digital era, while there is an overflow of information, there is also, ironically, a lack of focused effort that systematically documents and archives the everyday scenario – the mundane life that is infused with cultural symbols.

Project 365 Tiruvannamalai was led by contemporary Indian photographer Abul Kalam Azad. He has contributed the major part of the three thousand and odd photographs that are part of the public archive.  The contributors include R R Srinivasan, Dinesh Khanna, Waswo X Waswo, Thierry Cardon, Ramu Aravindan, Shibu Arakkal, Bhagyashri Patki, Ami Gupta, Arnav Rastogi, Leo James, J Jayaraman, Biju Ibrahim, Radhi Jangla, Jiby Charles, P Venkatesan Perumal, Varun Gupta, Seema Krishnakumar, Iqbal M K, Boney K R. and others. Each project photographer worked on his/her own individual photo project, using their own medium of choice – smartphones, 35mm, digital cameras, traditional cameras – providing a comprehensive view of contemporary Tiruvannamalai. The strength of the project is the collective consciousness generated by the team, which is made of individuals who come from diverse cultures, languages, experiences, exposures, and interests. As a collective, they try to weave a comprehensive visual narrative, which can only be perceived when seen as a whole.

In this page, we are presenting a curated selection of some photographs collated from the 3000 and odd photographs that are a part of the Project 365 public photo-art archive Tiruvannamalai. 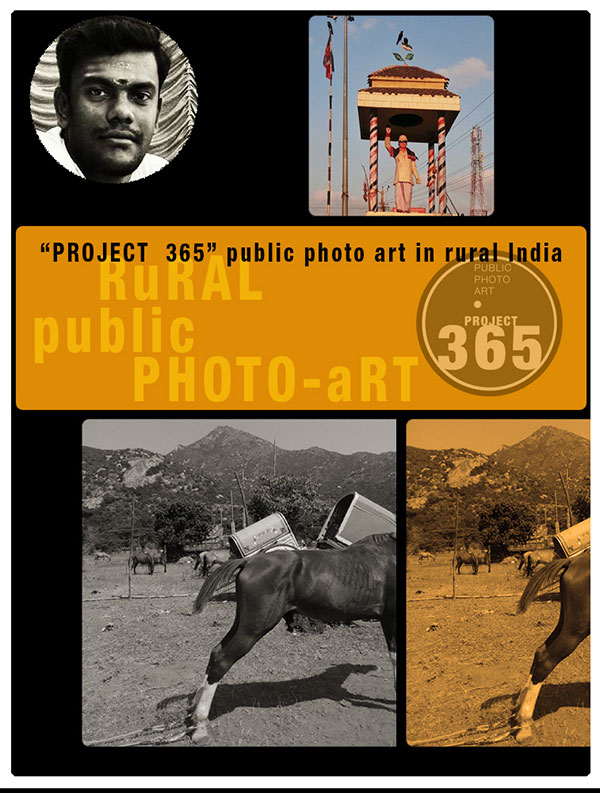 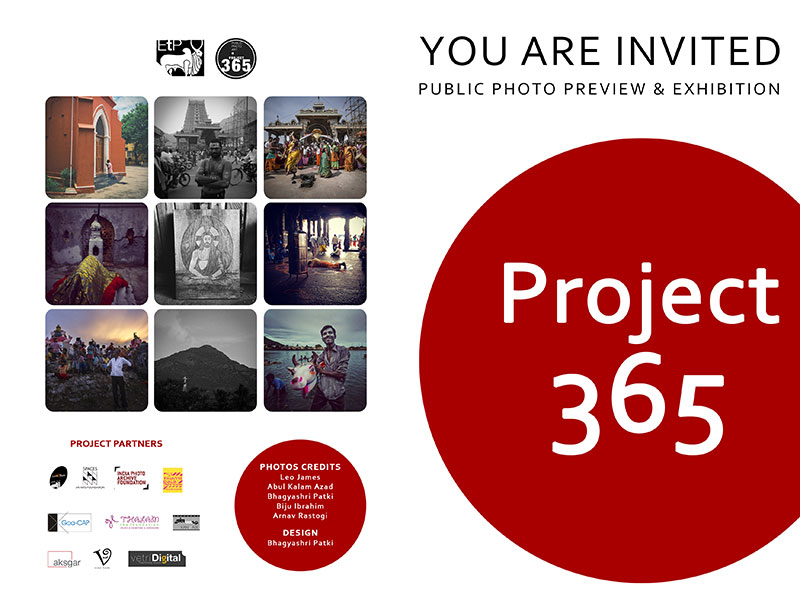 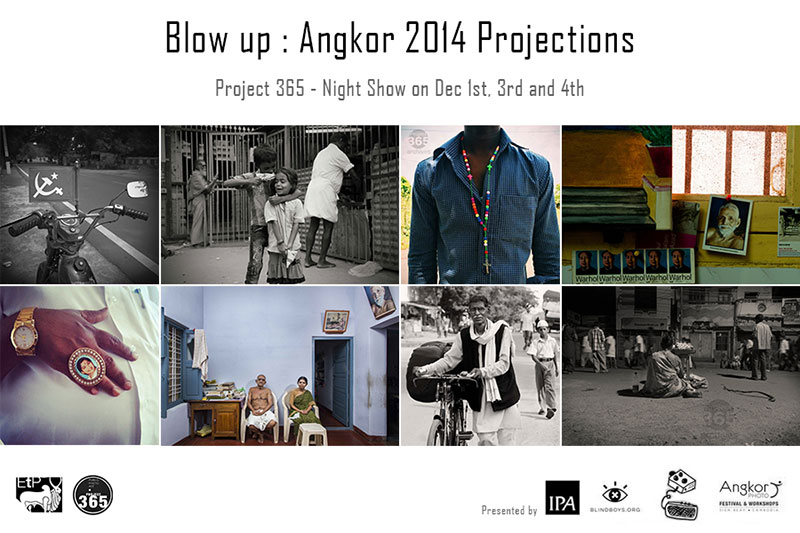 A series of images encompassing a variety of people, objects, spaces, events, and symbols, all with a single thread in common – the day-to-day life in the town of Tiruvannamalai. These images were shot by Abul Kalam Azad.

Tiruvannamalai being a popular nature worship place, it attracted people from different walks of life to come and go as well as settle here starting as early as the Tamil Classical Era. Even now, several hundreds of people visit this town every month, contributing to the cultural economy of the region. The public archive has many images of these common people, who do not usually take a place in the historical narrative. The images were shot by Abul Kalam Azad, Ramu Aravindan, Dinesh Khanna, RR Srinivasan, Waswo X Waswo, Thierry Cardon, Ami Jangla, Arnav Rastogi, Bhagyashri Patki, Iqbal MK, Seema Krishnakumar, Boney KR and Varun Gupta

Deepam is an annual festival celebrated during the month of Karthikai. The festival is a grand occasion at Tiruvannamalai, attracting lakhs of nature worshippers and devotees who partake in the celebrations and witness the lighting of the lamp on top of the Annamalai hill. The celebrations are usually organised by people from different caste and religious backgrounds. There are several stories about its origins, but like all such festivals, this is also a gathering of villagers and traders from near and far. Cattle fair in Tiruvannamalai was very famous, however this too is declining. The images were shot by Abul Kalam Azad, Bhagyashri Patki, Shiv Kiran, Ami Jangla, Iqbal MK, Jiby Charles and Arnav Rastogi.

The Sangam-era maritime interactions became the gateway through which religions including Judaism, Christianity and Islam to spread to South India. Interestingly, unlike the rest of South India, where Christians have a history of about 2000 years, this temple town has seen only three generations of Christians that constitutes roughly about 2.7% of the total population. A majority of them, are first or second generation Christians and they are yet to completely covert from their traditional practices and lifestyle. However, they play an influential role to play in the social development of the town. Presenting a few images from this large body shot by Leo James, Dinesh Khanna, J Jayaraman and Abul Kalam Azad.

The fertile land surrounding the Annamalai Hill, the dead volcano is a host to a variety of plants, herbs and trees, many of which are utilized for medicines and as food. The land is also rich with traditional and indigenous practitioners. Here is a collection of select images from of the indigenous herbs and folklore practitioners shot by Pee Vee and Jiby Charles.

The colors that are used in houses, attires etc., become the signifiers of a society and South India, especially Tamil Nadu is known to be vibrant in their colors. The flamboyantly colored houses that have come to typify Tamil Nadu can be seen in abundance in Tiruvannamalai, and are owned by people across communities. Some images of colored houses shot by Radhi Jangla, Abul Kalam Azad, Dinesh Khanna and Leo James.